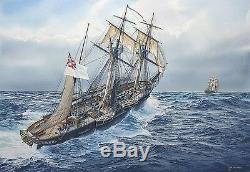 WE SUPPORT OUR TROOPS AND COUNTRY. Tom Freeman passed away, unexpectedly, on June 16, 2015. A brilliant artist, he will be missed by so many around the world. Tom Freeman was born in Pontiac, Michigan in 1952. He was the third child of James and Doshia Freeman, (3rd of 5 children).

The Freeman's lived in Michigan until Tom was 12 years old when the family moved to Baltimore, Maryland. Tom never had any formal art training and had always considered his talent as a God given gift. In fact school was of very little interest to him. Marine Corp Reserve in 1970. He later transferred from the Marine Corps Reserve to the regular Army.

The first publisher to contact him and offer him a cover was G. Tom has worked with most of the large publishing houses such as Dell, Jove, Bantam, and Berkley. Tom's work has appeared on many magazines such as Readers Digest, Popular Mechanics, Boating, Yachting, Business Week, and even the TV Guide.

His work has been placed on porcelain plaques and plates for Franklin Mint and the Hamilton Group. Tom's artwork has been exhibited in many galleries Kirsten, Greenwich, Mystic, and the Grand Central Gallery. He has done work for the National Parks Service and many corporations throughout the world. In 1986 Tom was asked to hang his original paintings in the West Wing of the White House.

Currently, there are 8 original paintings hanging there along with several of his limited edition prints. Tom completed 12 paintings, which were on exhibit at the Naval Museum in Washington, DC. Commemorating the 60th anniversary of the attack. One of Tom's paintings was donated to the State of Israel; it hangs in the Immigration/Clandestine and Naval Museum in Haifa.

On September 3, 2003 Tom presented a painting to President George W. Bush depicting the President's landing aboard the U. The painting was presented to him in the Oval Office. Tom won the 2003 Gold and Platinum Ozzie Award in the category of "Best use of illustration for a single article, " Popular Mechanics Magazine, The Hearst Corporation.

If the Limited Edition is 400 s/n, there would be 40 APs. This status is noted on the print. Collectors prefer APs because their value increases even more than a Limited Edition as time goes by. All Limited Edition artwork is subject to availability at time of order. The item "You Can Run Tom Freeman Civil War Art Confederate Raider C.