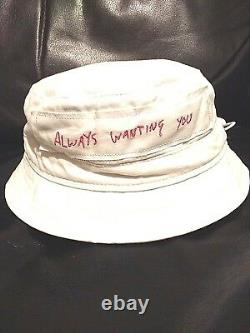 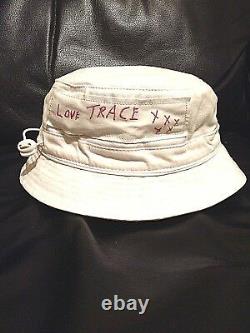 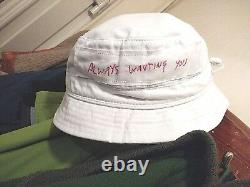 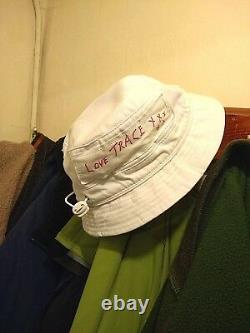 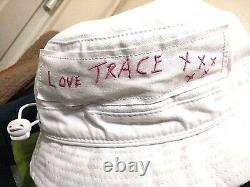 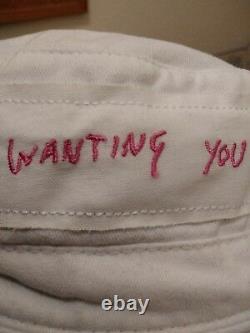 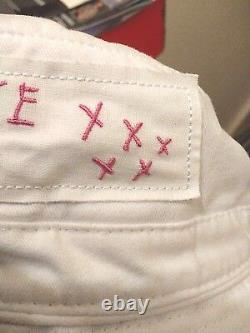 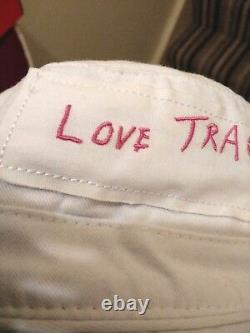 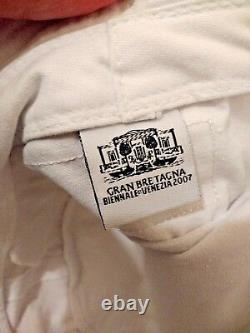 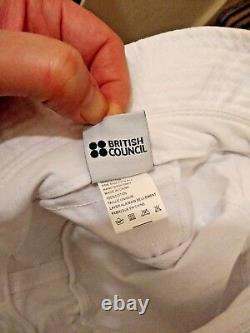 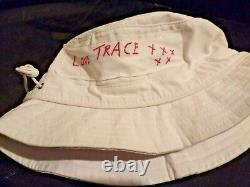 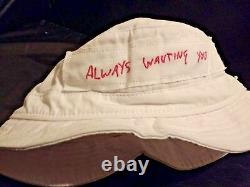 Two Embroidered panels on the side reading " ALWAYS WANTING YOU" & " LOVE TRACE XXXXX" on the other side. Totally unworn, clean, and original unmarked condition. Lovely label inside reading, "GRAN BRETAGNA BIENNALE VENEZIA 2007".

This is a very good quality white heavy duty cotton with a draw string and spring clip. Good for a collection and a small piece of history - very rarely seen for sale. Un hat is not numbered neither signed by the artist. The sale is for the sun hat not the catalogue. The largest number of countries in the Venice Biennales history were officially represented in 2007 - a total of 106. At the British Pavilion, Tracey Emin was invited to be the second British female artist to present a solo exhibition, following fellow in the footsteps of Rachel Whiteread in 1997. Emin takes inspiration from her own life with an astonishing urgency. Many of her works explore how it feels to be taken over by all sorts of feelings, whether they are exhilarating, frightening, embarrassing, confusing, disabling or empowering. Emin was thrilled to exhibit at the British Pavilion and said. The chance to exhibit at the Venice Biennale is a great honour and has helped me to redefine what my work really means to me.

Borrowed Light is my most feminine body of work so far, very sensual but at the same time it is graphically sharp. It is both pretty and hardcore.

For me, as an artist, what's important is to cover everything from the emotional to the literal, and sometimes that means I give myself a very hard time. Emins exhibition at the Pavilion, entitled Borrowed Light, showed her uniquely intimate form of emotional realism.

This show also highlighted the broad variety of media that she works in, from embroidery and drawing to painting and neon. The exhibition has a delicacy and lightness of touch that belie Emins ability to reach just below the level of tastefulness. Like all the best art, it looks spontaneous, yet Emin is past mistress at drawing on forms and expressions normally thought beyond the pale - the cute, the sentimental so that she can prick pretension and close the gap more narrowly between her feelings and ours, said Andrea Rose, Commissioner for the Pavilion and Director Visual Arts at the British Council. Tracey Emin CBE RA was born in London in 1963 and raised in Margate before studying at Maidstone College of Art and The Royal College of Art, London.

Renowned for her installation in the Sensation exhibition at The Royal Academy in 1997, she has exhibited extensively internationally. Her work combines the personal, intimate and honest with the bold and scandalous, and encompasses needlework, sculpture, photography, drawing, painting video and installation. In 2007, Emin represented Britain at the 52nd Venice Biennale, was elected a Royal Academician and awarded an Honorary Doctorate from the Royal College of Art, London, a Doctor of Letters from the University of Kent and a Doctor of Philosophy from London Metropolitan University. Emin was Eranda Professor of Drawing at the Royal Academy Schools from 2011 to 2013.

She lives and works in London. Please look at my other items including rare modern and contemporary art and design pieces. The item "TRACEY EMIN RA ALWAYS WANTING YOU HAT (2007) EMBROIDERED LOVE TRACE RARE" is in sale since Saturday, December 29, 2018. This item is in the category "Art\Art Prints".