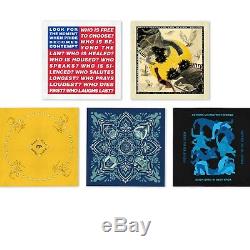 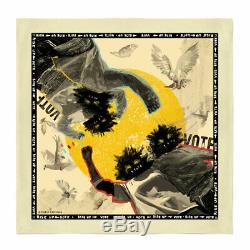 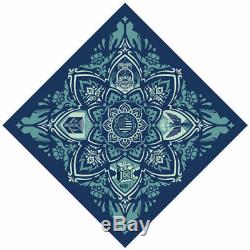 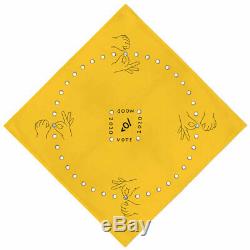 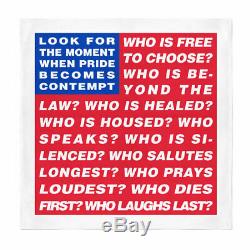 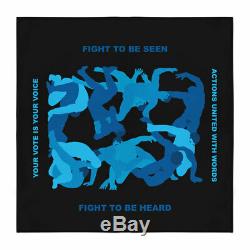 Each bandana measures: 22 inches by 22 inches. Artists Band Together is a pro-democracy political rebellion in the form of artist-designed bandanas. From the American Revolution to Harriet Tubman and the abolitionist movement to Rosie the Riveter, bandanas have played an important role as a historical symbol in the struggle for freedom. In the midst of a global pandemic and a powerful civic awakening, our artists bandanas seek to carry that spirit into the future as a sign of our collective commitment to democratic values. As Americans band together to demand justice in the streets, we also have to make sure that our voices are heard at the ballot box in November.

Shepard Fairey is a contemporary street artist, graphic designer, activist, and founder of OBEY Clothing and creative agency Studio Number One. In 1989, while at Rhode Island School of Design studying for his Bachelor of Fine Arts in Illustration, Shepard Fairey created the Andre the Giant has a Posse sticker that later evolved into the OBEY GIANT art campaign.

In 2008, his portrait of then-Democratic candidate Barack Obama became an internationally recognized emblem of hope. Since then, Fairey has painted more than 105 public murals, become one of the most sought-after and provocative artists in the world, and changed the way people converse about art and view the urban landscape. The Four Moods of Voting.

Bandana By Christine Sun Kim. Christine Sun Kim uses the medium of sound in performance and drawing to investigate her relationship with spoken languages and her aural environment. Selected exhibitions and performances have been held at: MIT List Visual Arts Center, Cambridge (solo); Ghebaly, Los Angeles (solo); White Space, Beijing (solo); Carroll/Fletcher, London (solo); De Appel, Amsterdam (solo); Serralves Museum, Porto; Sound Live Tokyo; Albright-Knox Art Gallery, Buffalo; Walker Art Center, Minneapolis; Berlin and Shanghai Biennials; Hamburger Bahnhof, Berlin; San Francisco Museum of Modern Art; Whitney Museum of American Art, New York; and the Museum of Modern Art and MoMA PS1, New York. Barbara Kruger is one of the most influential artists of her generation. Employing media effects and strategies, Kruger creates her own sexual, social, and political messages, challenging the stereotypical ways mass media influences societys notions about gender roles, social relationships, and political issues, resulting in art that compels ethical change and reflection. Kruger is represented in many museum collections, including The Metropolitan Museum of Art, New York; The Museum of Contemporary Art, Chicago; The Museum of Contemporary Art, Los Angeles; The Museum of Modern Art, New York; Solomon R. Guggenheim, New York; and Tate Modern, London. Kruger lives and works in Los Angeles and New York. Kruger is a Distinguished Professor of New Genres at the UCLA School of the Arts and Architecture. Xavier Schipani is a trans artist whose practice is dedicated to articulating the personal, social and political aspects of his identity. His joyful and vivid figurative paintings celebrate the trans male nude and offer visibility for non-binary bodies. The large scale of much of his work is intentional and references the monumental loss that trans lives have experienced due to a historical lack of representation. By offering a visual identity to accompany transmasculinity, his art seeks to construct safe spaces where restrictive sexual and gender norms lose their hold and open dialogue is possible. Xavier Schipanis work has been widely exhibited and appears in commissioned public murals from Austin to New York City. A graduate of the Maryland Institute of Art, the artist lives and works in Austin, Texas. Mijente is a political, digital, and grassroots hub for Latinx and Chicanx organizing and movement building. Rise is a student-led nonprofit organization mobilizing college students through advocacy and voting campaigns nationwide. Woke Vote is investing in the long-term activation of new organizers and mobilizing historically disengaged voters in black constituencies. Matchfire is a promotional agency which helps define client brand promotional strategy through auctions and sales, delivers creative design, and manages operations of feature online auctions and sale for maximum visibility of well-known brands, media companies, charities, nonprofits, public relations firms and advertising agencies. Q: Is the campaign open internationally? A: Unless otherwise noted above the campaign is open worldwide. Q: Will a receipt be provided?

The platform launched in 2003 and has helped over 83 thousand nonprofit organizations architect and implement fundraising ideas and charity auctions that engage over 197 million active buyers. Warranties: It is the buyers responsibility to preview any item(s) and determine condition, authenticity, and content. Rise, Mijente and Woke Vote will receive equal proceeds of the funds from this sale after administrative costs are covered. All sales are in US dollars. This campaign does not include any items or services that are not detailed above.

Limited inventory will be updated regularly. The item "Set 1 of 3 Artist Band Together Five (5) Bandanas" is in sale since Monday, August 17, 2020. This item is in the category "Art\Other Art". The seller is "artists_band_together" and is located in San Luis Obispo, California. This item can be shipped worldwide.