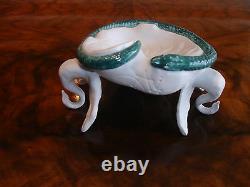 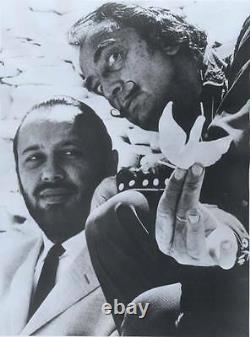 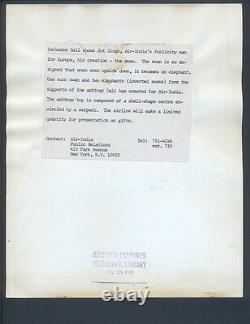 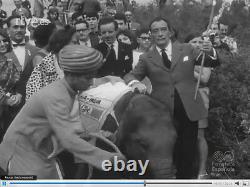 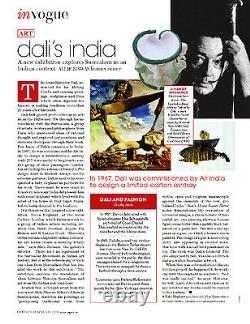 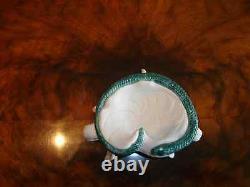 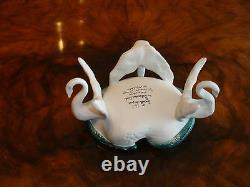 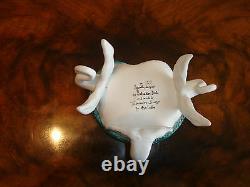 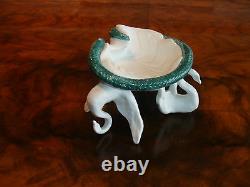 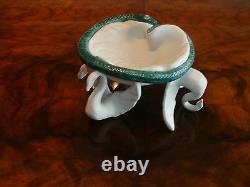 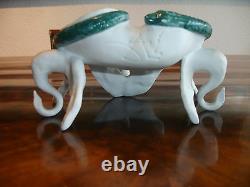 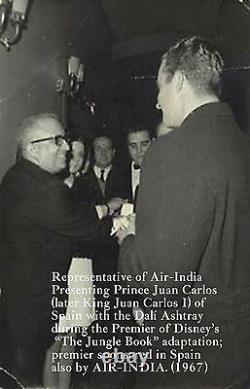 You will receive this piece with the Air India Official Certificate of its limited edition and number. Requested to Dali by Air India Year 1967. Salvador Dalí Swan-Elephant Ashtray original Limoges' porcelain limited edition was of only 275 numbered pieces of which this is Nº 142, according to the Certificate issued by Air-India Spain to the recipient of the piece made in green-enameled porcelaine and bisque porcelaine. Included in some of the most prestigious museum collections Modern Art / Decorative Art Only 275 units made Designed by Salvador Dalí Decorated by Jules Teissonniere Manufactured by: Limoges.

Elephants et serpent - Pouvant servir de cendrier Limoges porcelain, 8.6 x 12.8 x. In 1967, the airline company Air India was to inaugurate its first flights to New York and extend its coverage of Spain and other European countries.

So they asked the master of surrealism to design for them a work of art. Accompanied by a mahout the young elephant, re-named "Big Baby", was therefore sent by Air India and traveled from Bangalore to Cadaqués to settle at the artist's beautiful villa, its home until 1971; it would then be accommodated at the Barcelona zoo. Tickled by the news, the mayor of Cadaqués organized a three-day celebration to welcome "Big Baby" who was surrounded by crowds of inhabitants and people from all around.

Salvador Dali was delighted to see the young elephant parading down Main Street, decked out to party for three nights of music, fun, wine and champagne rosé, Dali's favorite. The Indian minister of tourism even invented a drink to commemorate the event. Inspired by the festivities, the artist produced a sculpture which, in 1967, he offered to Prince Juan Carlos, during the premier of "The Jungle Book" (also sponsored by Air-India in Spain) The ashtray revealed a? Double image': the body of the ashtray shaped like the operculum of a shell is embraced by a serpent inspired by one of Gala's bracelets; the same one she is wearing in the portrait "Galarina", that her lover had made for her in 1945. The sculpture stands on three surrealist legs, on one side is an elephant head flanked on each side by a swan.

It was in 1930 that Dali began developing his discovery of the? Double image' effect through a? Paranoia critical method' by which, without the slightest figurative modification to its anatomy, an object can take on an entirely different appearance. The Swan-Elephant ashtray illustrates how the shadow and shapes of the elephant can easily be taken for those of the swan and vice-versa. So the inverted swan becomes an elephant and the elephant head when inverted becomes a swan.

It is not clear how many copies were produced for Air India; but this is one of them, it is in exceptionally good condition, and though the certificate accompanying the piece establishes only 275 were made, I have seen other ashtrays contradicting this figure, some of which may be fake. Regardless the aforesaid, I have never come across another astray numbered above 1.000, therefore, I guess that 1.000 could be the final edition run.

The item "Salvador DALÍ Air India Swan Elephant Dali Ashtray 1967" is in sale since Tuesday, December 20, 2016. This item is in the category "Art\Art Sculptures".books" and is located in Pozuelo de Alarcón.