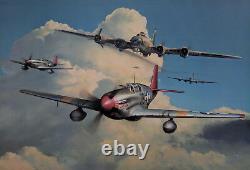 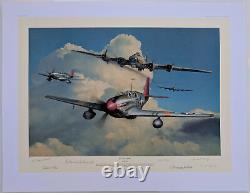 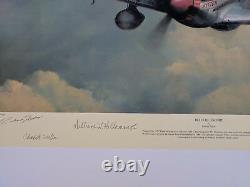 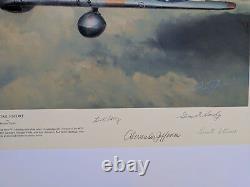 A STUNNING LIMITED EDITION BY ONE THE WORLDS MOST COLLECTED AVIATION ARTISTS, PERSONALLY AUTOGRAPHED BY THE LEGENDARY'FIGHTING RED TAILS. Despite lingering racial prejudice and some opposition within the Air Force, President Roosevelt had ordered the USAAF to form an all African American fighter pilot unit, its crews to be trained at Tuskegee in Alabama. To the surprise of their critics, the Tuskegee Airmen were to prove their detractors spectacularly wrong from the first day they went into action in Italy in May 1943. Their iron discipline earned this famous unit the respect and admiration of hundreds of bomber crews, and created a legend.

Richard Taylors striking piece depicts Tuskegee Red Tail pilots of the 332nd Fighter Group as they close in to escort home a damaged B-17 Fortress of the 483rd Bomb Group. Released in 2007, it has been endorsed by the signatures of SIX of the famous Tuskegee pilots who flew in combat during WWII. Released in 2007, this is the perfect piece for collectors of WWII aviation and historic autographs.

YOUR PIECE OF MIND: As a reputable company, if any issues do arise we don't expect our customers to deal with it. Please note: The signatures on our pieces are not reproductions; they are original autographs, hand-signed by the veterans involved. The item "Red Tail Escort by Richard Taylor signed by 6 Tuskegee Airmen with Charles McGee" is in sale since Wednesday, July 10, 2019.

This item is in the category "Art\Art Prints". The seller is "aceshighgallery" and is located in Ojai, California.