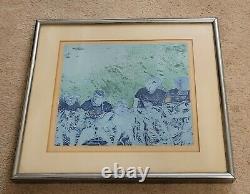 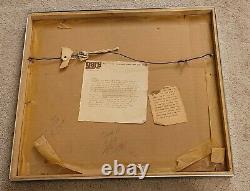 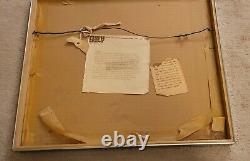 ARTWORK MEASURES APPROXIMATELY 9 1/2 X 11 INCHES NOT INCLUDING SIGNATURE/TITLE/NUMBERING. BACK OF FRAME HAS LABEL FROM NEW YORK CITY GALERY GARY ARTS WHOLESALE INC IN MANHATTAN ON TWENTY SEVENTH STREET. VERY RARE ETCHING BY THIS INFLUENTIAL ARTIST. Mohammed Omar Khalil was born in Khartoum, Sudan, in 1936 and lives and works in New York City since 1967.

Khalil is one of the Arab world's most important contemporary painters, having influenced two generations of regional artists. His work, spanning over forty years, across painting and print-making, is in a privileged position between the canon of modern Arab art and the artist's ground-breaking practice, searching for a dialogue between dissimilar cultures.

Profoundly influenced by his travels throughout the Middle East - in particular Morocco and Sudan - and the art history of Europe that he became immersed in during his studies in Italy, Khalil has brought to life a pioneering form of art, in which elements and patterns from tradition merge with pop art and fine prints. Khalil's work illustrates with vividness the complex relationship between the symbolic forms of the East and the conceptual art born in Europe. His series "The Battle of San Romano" is a contemporary rendition of the history paintings by the 15th century Florentine artist credited with pioneering in visual perspective, and not unlike Khalil, someone who transitioned between the late Gothic and the Early Renaissance. Using the same dimensions as Ucello's grand-scale panels, the Sudanese artist's canvases reproduce the perspective depth in a collage technique deploying his multi-layered signature symbolic order, merging at once fresco and mosaic.

The effect is heightened by the introduction of decorative elements from the Islamic world and a balanced aura of earth colors. A master print-maker on his own right, Mohammed Omar Khalil has been also working on etching throughout his whole career, using an age-old technique of the European masters to illustrate the book of contemporary art, inspired by the tragic history of the 20th century, letting his imagination run free and yet, running counter to the saturation of color and brightness typical of the pop art age. He has developed a composite grammar of omnipresent blackness, retrieving a primal simplicity as the preferred site for his cosmopolitan observations and the stage of his many aesthetic interventions that sooner or later found their way into the more colorful canvases. At the climax of his creative forces, the artist's desire to inflect the consciousness of the era is made manifest in discreet impressions. Mohammed Omar Khalil studied at the School of Fine and Applied Art in Khartoum, Sudan and then pursued graduated studies in fresco painting and print-making in Florence.

Since then, he has been living in the United States and until recently, taught at the Parsons School of Design in the New School. His work has been part of numerous solo and group exhibitions in Africa, the Middle East, Europe, Asia and the Americas. The artist's work is found in different public and private collections, including the Metropolitan Museum of Modern Art, Grenoble Museum in France, the Jordanian National Museum and the Brooklyn Museum of Art. A retrospective of his print-making work with an accompanying monograph will be showcased at Albareh in 2014.

(8 color plates), biographies of over fifty artists. By Kay Walkingstick; text by Noah Jemisin. One of the early references to Blackburn's profound influence on the printmaking world, and still not focusing on his own prints.

Detailed discussion of two African-born artists working in the U. Ethiopian artist Boghossian who left Ethiopia in 1955 to study in Europe, taught in France, Ethiopia, and at Howard University, from 1974 on. Sudanese printmaker Mohammed Omer Khalil left his native Khartoum in 1959, studied in Italy and has lived and worked in New York since 1967.

Of work or photos of many artists, brief descriptive texts by well-known scholars, with selected list of exhibitions for each, plus many artists' statements. A noticeable absence of many artists under 45, most photographers, and many women artists. Far fewer artists listed here than in Igoe, Cederholm, or other sources. Museum of Art, Savannah College of Art & Design [SCAD]. You Can't Desert the Muse: Focus on Recent Print Acquisitions.

Mohammad Omer Khalil, etchings, Amir I. November 16, 1994-February 26, 1995. Two eminent Sudanese artists, both active in the U. Rockland Center for the Arts.