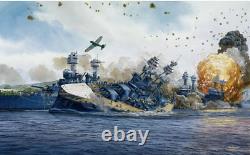 WE SUPPORT OUR TROOPS AND COUNTRY. Tom Freeman passed away, unexpectedly, on June 16, 2015. A brilliant artist, he will be missed by so many around the world. Tom Freeman was born in Pontiac, Michigan in 1952. He was the third child of James and Doshia Freeman, (3rd of 5 children). The Freeman's lived in Michigan until Tom was 12 years old when the family moved to Baltimore, Maryland. Tom never had any formal art training and had always considered his talent as a God given gift. In fact school was of very little interest to him.

Marine Corp Reserve in 1970. He later transferred from the Marine Corps Reserve to the regular Army. His military service extended from 1970 to 1977. Tom's professional art career started when he left the military. He would visit the U.

Naval Institute and would take samples of his work to them. Finally, he asked what it would take to get his artwork on Proceedings Magazine. A gentleman by the name of Dell Kaiser showed Tom the artwork of Carl Evers. Tom contacted Carl and to this day considers Mr.

Evers the master of watercolors. Carl was very supportive, he told me to look closely at the art and that I would figure it out on my own. Finally, Proceedings used one of Tom's paintings for their cover. This started Tom on the path of success.

Tom started taking 35mm slides of his work and sending them to various book publishers. The first publisher to contact him and offer him a cover was G. Tom has worked with most of the large publishing houses such as Dell, Jove, Bantam, and Berkley.

Tom's work has appeared on many magazines such as Readers Digest, Popular Mechanics, Boating, Yachting, Business Week, and even the TV Guide. His work has been placed on porcelain plaques and plates for Franklin Mint and the Hamilton Group.

Tom's artwork has been exhibited in many galleries Kirsten, Greenwich, Mystic, and the Grand Central Gallery. He has done work for the National Parks Service and many corporations throughout the world. In 1986 Tom was asked to hang his original paintings in the West Wing of the White House. Currently, there are 8 original paintings hanging there along with several of his limited edition prints.

Tom completed 12 paintings, which were on exhibit at the Naval Museum in Washington, DC. Commemorating the 60th anniversary of the attack. One of Tom's paintings was donated to the State of Israel; it hangs in the Immigration/Clandestine and Naval Museum in Haifa. On April 10, 2002 Tom had the honor of giving one of his paintings to the Holy Father, Pope John Paul II in Vatican City, Rome. The painting is hanging in Pope Pius IX museum in Italy.

The White House Historical Association commissioned Tom for 4 years to produce cover art for the Association's annual Christmas card. Tom was awarded the Department of the Navy Superior Public Service Award on April 3, 2003.

On September 3, 2003 Tom presented a painting to President George W. Bush depicting the President's landing aboard the U. The painting was presented to him in the Oval Office. Tom won the 2003 Gold and Platinum Ozzie Award in the category of "Best use of illustration for a single article, " Popular Mechanics Magazine, The Hearst Corporation. Tom also won the SILA award for the 42nd Society of Illustrators Los Angeles annual contest; winning the silver award for Editorial Artwork.

Tom had been selected as the first artist in residence to the United States Naval Institute. Tom Freeman Numbered Limited Edition Print "Last Torpedo". Oklahoma starting to capsize, December 7, 1941. The OKLAHOMA was moored outboard alongside the MARYLAND. The WEST VIRGINIA was the first battleship to be hit and within a short period of time the OKLHOMA was laid upon. Lieutenant Jinichi Goto's second torpedo struck the OKLAHOMA. Goto was the leader of the torpedo-bomber squadron from the AKAGI. Goto was so low in his attack pass, that he came close to hitting the OKLAHOMA's crows nest. The attack on the OKLAHOMA lasted 8 minutes before the battleship began to roll. Within that short span of time, OKLAHOMA was hit 5 times by torpedoes. She capsized at a 150 degree angle.

Her masts touching the bottom of the harbor halted her movement. Four hundred and forty-eight men lost their lives aboard the OKLAHOMA on the day known as "The Day of Infamy". Oklahoma, BB-37, received a battle star for her brief service during World War II. All Limited Edition prints are numbered and include a Certificate of Authenticity (COA). Limited Edition prints are restricted to a certain number.