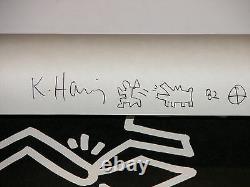 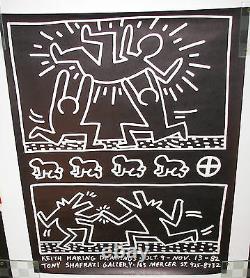 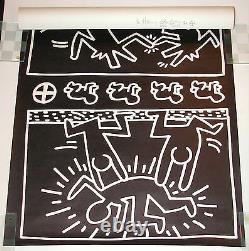 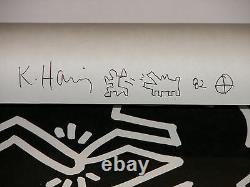 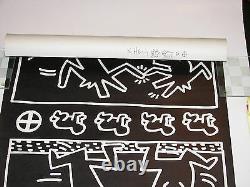 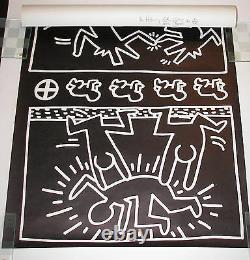 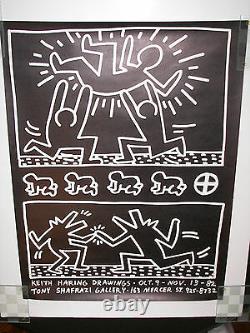 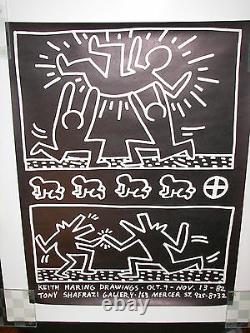 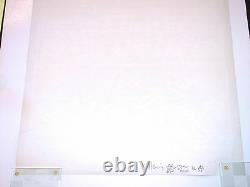 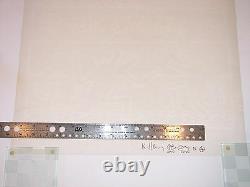 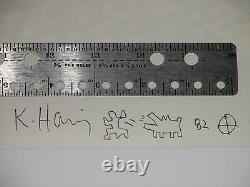 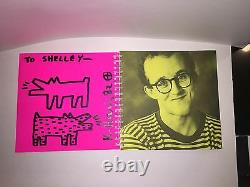 KEITH HARING DRAWINGS EXHIBIT POSTER - 1982 [SIGNED & dated BY HARING WITH AN ORIGINAL SIGNATURE IN INK]. +++PLUS an Original Whimsical Drawing by Haring of 2 of his iconic figures on the REVERSE side of Poster. O Described and pictured in photographs attached. O Category: ART POSTER - LIMITED EDITION - ORIGINAL Never Framed - Excellent Condition. OFFERED FOR SALE IS AN ORIGINAL SHOW PHOTO OFFSET LITHO PRINT which Haring SIGNED ON THE REVERSE SIDE at the request of my sister Shelley who met Haring at multiple shows in NYC.

ALONG WITH HARING'S SIGNATURE IS A DRAWING HARING MADE OF A BARKING DOG AND A MAN RUNNING AWAY-LENGTH OF SIGNATURE AND DRAWING IS ABOUT 5 (see photograph). NOTE: MY SISTER SHELLY MET HARING ON MULTIPLE OCCASIONS AT HARING'S EXHIBITS IN NEW YORK CITY THROUGHOUT THE 1980s -- AS AN EXAMPLE, I INCLUDED FOR REFERENCE ONLY ANOTHER WORK MY SISTER SHELLY HAD SHOWING A DRAWING HARING MADE FOR HER OF 2 BARKING DOGS DEDICATED TO HER.

SEE IMAGE IN PHOTOS ATTACHED OF HARING'S ORIGINAL, WHIMSICAL DOUBLE FIGURE DRAWING. I have several photos my sister took of Haring when she met him at different shows during the 1980s.

This photo CD of about 30 images taken at Haring shows includes a photo of Haring posing for my sister. A link to these photos will be provided upon request. CONDITION: Please view the high resolution images included in this listing to judge the excellent condition of this poster and original drawings for yourself. This rare poster with Haring's ORIGINAL SIGNATURE AND DRAWINGS is from the estate of my late sister who was herself an "outsider" artist and attended countless art exhibits in New York during the 1980s. The authenticity of this poster and drawing is absolutely guaranteed.

This book and drawing were found among a large group of original Haring show promotional posters, post cards, pins, and other objects from various Haring and other New York art scene artist exhibits in liquidating the estate of my late sister. From: Urban & Adventurous Artists - Part 31980 -- Keith Haring started his career as a graffiti-artist in the New York metro. He drew his stylised cartoon-figures on unused advertisement spaces. While going to the bakery he met the photographer Tseng Kwong Chi who followed him on his metro-expeditions and photographed his work.

Without the photographs none of his early work would have survived, because all of it was illegal and temporary...... FROM THE JACKET OF THE HARING BIOGRAPHY BY GRUEN:"PORTRAIT OF THE ARTIST AS A YOUNG RADICAL"Keith Haring was the radiant child of the art world. His life and work were emblematic of the popular culture of the 1980s. What began as rebellious street art became, in a ten-year career, coveted and lauded fine art by decade's end.

But less than two months into the nineties, Keith Haring was dead from AIDS. Despite criticism of his populist approach to art-making and of his overt sexual themes, he produced an outstandingly diverse body of work and engendered a huge international public...... Like Andy Warhol, Keith Haring was a radical who came along to alter the definition of art and the rules for creating it. He undertook his work with intent and a serious passion. OTHER KEITH HARING ORIGINAL SHOW LITHOGRAPHS BEING OFFERED IN MY OTHER CURRENT AUCTIONS [or soon to be listed] INCLUDE AMONG OTHERS:-- NUCLEAR NIGHTMARE Nuclear Disarmament Rally -Year PRINTED & Issued: 1982-- (unsigned).

It has been rolled and in storage since the show. Published to announce a show of Keith Haring drawings at Tony Shafrazi Gallery on Mercer Street in the fall of 1982 Oct. 13, the poster measures 18" X 24". Haring experimented with performance, video, installation and collage, while always maintaining a strong commitment to drawing.

In 1980, Haring found a highly effective medium that allowed him to communicate with the wider audience he desired, when he noticed the unused advertising panels covered with matte black paper in a subway station. He began to create drawings in white chalk upon these blank paper panels throughout the subway system.

The subway became, as Haring said, a laboratory for working out his ideas and experimenting with his simple lines. Between 1980 and 1986, Haring achieved international recognition and participated in numerous group and solo exhibitions. His first solo exhibition in New York, held at the Tony Shafrazi Gallery in 1982, was immensely popular and received critical acclaim. During this period, he participated in highly renowned international survey exhibitions such as Documenta 7 in Kassel Germany, the Sao Paulo Biennial and the Whitney Biennial. Haring completed numerous public projects in the first half of the 80's as well, ranging from an animation for the Spectracolor billboard in Times Square, designing sets and backdrops for theaters and clubs, to developing watch designs for Swatch and creating murals worldwide.

Keith Haring was born on May 4, 1958 in Reading, Pennsylvania, and was raised in nearby Kutztown, Pennsylvania. He developed a love for drawing at a very early age, learning basic cartooning skills from his father and from the popular culture around him, such as Dr. Upon graduation from high school in 1976, Haring enrolled in the Ivy School of Professional Art in Pittsburgh, a commercial arts school. He soon realized that he had little interest in becoming a commercial graphic artist and, after two semesters, dropped out.

Later that same year, Haring moved to New York City and enrolled in the School of Visual Arts (SVA). In New York, Haring found a thriving alternative art community that was developing outside the gallery and museum system, in the downtown streets, the subways and spaces in clubs and former dance halls.

Here he became friends with fellow artists Kenny Scharf and Jean-Michel Basquiat, as well as the musicians, performance artists and graffiti writers that comprised the burgeoning art community. Haring was swept up in the energy and spirit of this scene and began to organize and participate in exhibitions and performances at Club 57 and other alternative venues. In addition to being impressed by the innovation and energy of his contemporaries, Haring was also inspired by the work of Jean Dubuffet, Pierre Alechinsky, William Burroughs, Brion Gysin and Robert Henriâ's manifesto The Art Spirit, which asserted the fundamental independence of the artist.

With these influences Haring was able to push his own youthful impulses toward a singular kind of graphic expression based on the primacy of the line. Also drawn to the public and participatory nature of Christo's work, in particular Running Fence, and by Andy Warhol's unique fusion of art and life, Haring was determined to devote his career to creating a truly public art. Height: 24" tall- 18" wide. Encyclopedia Link: Keith Haring (May 4, 1958 - February 16, 1990) was an artist and social activist whose work responded to the New York City street culture of the 1980s.

By expressing concepts of birth, death, sex and war, Haring's imagery has become a widely recognized visual language of the 20th century. Haring achieved his first public attention with chalk drawings in the subways of New York. These were his first recognized pieces of pop art. The exhibitions were filmed by the photographer Tseng Kwong Chi. Around this time, "The Radiant Baby" became his symbol.

His bold lines, vivid colors, and active figures carry strong messages of life and unity. In 1981 he sketched his first chalk drawings on black paper and painted plastic, metal and found objects. By 1982, Haring established friendships with fellow emerging artists Futura 2000, Kenny Scharf, Madonna and Jean-Michel Basquiat. Haring created more than 50 public works between 1982 and 1989 in dozens of cities around the world. His famous "Crack is Wack" mural, created in 1986, has become a landmark on New York's FDR Drive.

He got to know Andy Warhol, who was the theme of several of Haring's pieces including Andy Mouse. His friendship with Warhol would prove to be a decisive element in his eventual success, particularly after their deaths. Haring was diagnosed with AIDS in 1988. In 1989, he established the Keith Haring Foundation, its mandate being to provide funding and imagery to AIDS organizations and children's programs, and to expand the audience for Haring's work through exhibitions, publications and the licensing of his images. Haring enlisted his imagery during the last years of his life to speak about his own illness and generate activism and awareness about AIDS. During a brief but intense career that spanned the 1980s, Haring's work was featured in over 100 solo and group exhibitions. In 1986 alone, he was the subject of more than 40 newspaper and magazine articles. He was highly sought after to participate in special projects and collaborated with artists and performers such as Madonna, Grace Jones, Bill T. Jones, William Burroughs, Timothy Leary, Jenny Holzer and Andy Warhol. By expressing universal concepts of birth, death, love, sex and war, using a primacy of line and directness of message, Haring was able to attract a wide audience and assure the accessibility and staying power of his imagery, which has become a universally recognized visual language of the 20th century. Throughout his career, Haring devoted much of his time to public works, which often carried social messages. He produced more than 50 public artworks between 1982 and 1989, in dozens of cities around the world, many of which were created for charities, hospitals, children's day care centers and orphanages. Other projects include; a mural created for the 100th anniversary of the Statue of Liberty in 1986, on which Haring worked with 900 children; a mural on the exterior of Necker Children's Hospital in Paris, France in 1987; and a mural painted on the western side of the Berlin Wall three years before its fall.

Haring also held drawing workshops for children in schools and museums in New York, Amsterdam, London, Tokyo and Bordeaux, and produced imagery for many literacy programs and other public service campaigns. Keith Haring died of AIDS related complications at the age of 31 on February 16, 1990. A memorial service was held on May 4, 1990 at the Cathedral of St.

John the Divine in New York City, with over 1,000 people in attendance. Since his death, he has been the subject of several international retrospectives.

The work of Keith Haring can be seen today in the exhibitions and collections of major museums around the world. The item "HARING DRAWINGS EXHIBIT'82 POSTER-HARING SIGNED with BARKING DOG & MAN DRAWING" is in sale since Monday, March 9, 2015. This item is in the category "Art\Art Drawings". The seller is "radproject2" and is located in Hillsborough, North Carolina. This item can be shipped worldwide.