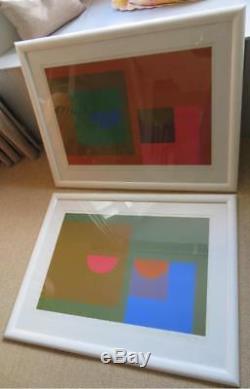 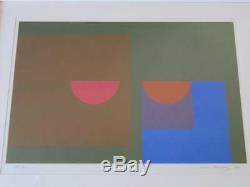 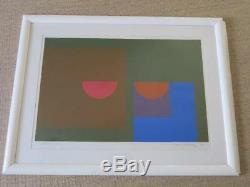 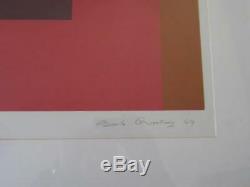 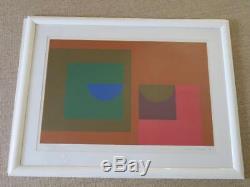 This is a wonderful pair of fully framed ready to hang pop art screenprints by the well listed British printmaker Bob Crossley. These are both framed and ready to hang and enjoy. At 1.1metres each they are too large to post therefore this is a: COLLECTION ONLY FROM NEAR CIRENCESTER - 15MINS FROM THE M4 AT SWINDON OR 15MINS FROM THE M5 AT GLOUCESTER.

When the abstract painter Bob Crossley moved from Rochdale to St Ives in 1959 he brought with him a solid reputation gained in the lively Manchester arts scene of the 1950s. He was essentially self-taught, his Manchester pictures based on figure or industrial landscape motifs. The irresistible Cornish landscape did not prevent the inevitable slide or ascent towards abstraction, the mode that dominated post-war St Ives art. In response to the work of Peter Lanyon, Roger Hilton, Terry Frost and many others which he encountered in St Ives, Crossley's painting increasingly expunged references to the external world and preoccupied itself with purely technical and painterly issues.

During the 1960s and beyond, therefore, Crossley's vividly coloured and gesturally assertive pictures contributed to the power and energy of the St Ives "school". Bob Crossley was born in Northwich, Cheshire, in 1912, but grew up in Rochdale, the Lancashire town where his father, an engine fitter, worked. Crossley left school at 14 and spent the 1930s working as a coach painter and signwriter.

With little formal education, Crossley relied on a sharp instinct and fertile imagination to propel him towards the arts. When time allowed he developed painting in oil and watercolour. Volunteering in 1939 for the Auxiliary Fire Service, Crossley served from 1941 until 1945 in the RAF. Involved in the Sicilian landings, he spent the final two years of the war in Italy, where he painted many landscapes in watercolour.

After demob Crossley pursued his interest in art to the full, attending drawing classes at the Mid Day studios in central Manchester and joining the Rochdale Art Society and the Manchester Academy. These proved vital conduits for a part-time artist compromised by day jobs running a sign firm and, with his enterprising brothers, a pattern-making business.

The Mid Day studios was run by the enthusiastic Margo Ingham, whose husband, Ned Owens, was an illustrator for the Manchester Guardian, an occupation that echoed Crossley's own graphic background. Crossley exhibited alongside leading Manchester artists, among them LS Lowry, at both the Mid Day studios and the Manchester Academy. Lowry's stature was apparent even then, Eric Newton stating at a Mid Day studios lecture on the old man's work that Lowry's rendition of Lancashire was better than Utrillo's of Paris.

Lowry's legendary shyness prevented a friendship, though he visited the Crossley family in Rochdale for Sunday lunch and allowed Crossley into his Mottram studio, where the younger man saw work in progress. Shortly before Crossley's move to Cornwall and exhibition with Reid, he had a solo exhibition at the Crane Gallery, Manchester. The peak event of his Manchester years, Crossley's exhibition won favourable plaudits, the Guardian' applauding a harvest of recent work resulting directly from a decision to paint full-time for two years. Pictures like Boys Fishing, Night Shift and Wash Day impregnated familiar, indeed mundane, themes with an apocalyptic mood and an intensity that, the Guardian noted, falls only a little short of a landscape by Kokoschka.

After following the well-trodden path from the north and finding his artistic Capri in south-west Cornwall, Crossley brightened his colour dramatically in response to the sub-Mediterranean conditions of the Penwith peninsula. Once installed in Cornwall, Crossley alternated between painting and running a beachside shop, a situation that did not always go down well in artistic bohemia but which gave him much-needed independence. This allowed him to develop as an artist on his own terms, though his 1960s pictures share the gestural immediacy, strident colour and simplification of landscape elements that characterise post-war St Ives painting at its best. His personal charm and magnanimity made him a popular, if slightly removed, member of the artistic community.

Nevertheless in 1960 he became a member of the Penwith Society and a member of the Newlyn Society a year later, his election to both owing not a little to the support of Terry Frost and the sculptor Brian Wall. Another sculptor, Breon O'Casey, became a long-standing friend. Crossley used his Penwith membership to the full, contributing every year to group exhibitions and enjoying three large solo exhibitions there in 1979, 1987 and 1999. Crossley's long Cornish career was interrupted during the mid-1960s by a spell living and working in London.

Further exhibitions were held at the Reid Gallery in 1964 and 1966, and in 1965 he enjoyed a solo exhibition at the Gallerie Bique in Madrid. Despite the foray into printmaking, Crossley's painting retained an uninterrupted spontaneity and painterly speed that eschewed graphic precision.

Large figure compositions, reminiscent of Keith Vaughan's male nudes, retained ostentatious brush marks as evidence of this raw, unmodified process. In the later, entirely abstract, works where all traces of figure or landscape themes were dissolved, Crossley pursued a self-imposed style in which the outcome was an unconcealed record of the procedures of the painting's execution. Emulating the existential spontaneity of the 1950s "action" painters, Crossley used the sharper, brighter palette of 1960s art. During the 1970s and beyond he replaced oil with acrylic with the result that his imagery exuded crispness and speedy confidence.

Often the pictures teased visual complexity from a restricted range of colour, bright undercoats flickering through broken surface patterns of wildly contrasting hues. Crossley painted from the 1970s in a large Porthmeor studio, within the long-established artist's complex with views directly on to Porthmeor beach.

Despite its long history as an artist's colony, however, St Ives and Crossley maintained a professional distance. Patrick Heron, in spite of also using a Porthmeor studio, had little contact with Crossley and did not use his influence as a critic to promote the northerner's work. Crossley did, however, follow Lanyon, Bryan Wynter and others in exploring nature fully, in his case skiing on Alpine slopes every winter. Informed by such exhilarating experiences, Crossley's work contributes to the raw experience-based energy of modern St Ives painting. His reputation will therefore be tied enduringly to the only genuinely popular abstract movement British art has produced.

Because of the fragile nature of picture frames, all frames are offered free with the painting. Jubilee Galleries specialise in Fine and Applied Art from the late 18th to the late 20th Century. Our particular interest lies in Mid Century modern art and design but appreciation is broad and therefore you may find anything from 1780's portraits to 1980's etchings. We also offer bank transfers for UK buyers. Please make cheques payable to Jubilee Galleries.

Replacement glass costs just a few pounds, is easily fitted, and saves the strong likelihood of your artwork getting damaged in the post if glass were included. You are also welcome to collect from our address near Cirencester, Cotswolds at no charge. To get in touch with us. Get images that make Supersized seem small.

Tailor your auctions with Auctiva's. The item "BOB CROSSLEY (1912-2010) A PAIR OF HUGE POP ART Pencil Signed Screenprints 1960s" is in sale since Sunday, December 16, 2018. This item is in the category "Art\Art Prints". The seller is "jubileegalleries" and is located in COTSWOLDS. This item can't be shipped, the buyer must pick up the item.