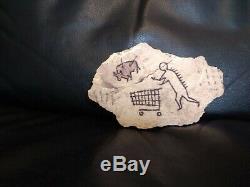 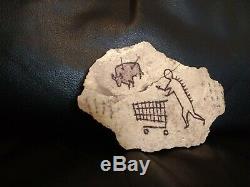 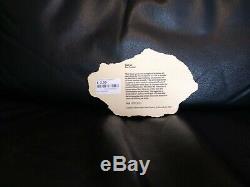 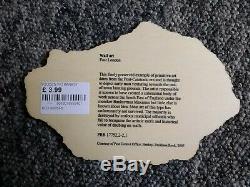 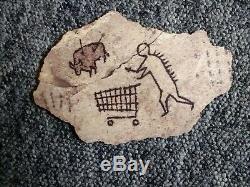 Banksy - Peckham Rock (2018). Bought directly from the British Museum, and endorsed by Banksy's own Pest Control.

Dimensions: 4 x 6 approx. Based on Banksys original "Peckham Rock" concrete piece. This was placed in The British Museum in 2005, accompanied by an authentic looking information label. It was there for three days before anyone realised something was out of place. You are looking at a wooden replica of Banksys Peckham Rock wall art, showing a supposed prehistoric figure pushing a shopping trolley.

A limited edition official Banksy art product. Produced by the British Museum for one of their latest exhibitions, I object: Ian Hislops search for dissent.

The reverse of the replica has a copy of the text from the information label that was originally placed with the wall art. The wooden replica has been made with the permission of Pest Control and is therefore an official piece of Banksy work. This finely preserved example of primitive art dates from the Post-Catatonic era and is thought to depict early man venturing towards the out-of-town hunting grounds. The artist responsible is known to have created a substantial body of work across the South East of England under the moniker Banksymus Maximus but little else is known about him. Most art of this type has unfortunately not survived. The majority is destroyed by zealous municipal officials who fail to recognise the artistic merit and historical value of daubing on walls. Courtesy of Pest Control Office, Banksy, Peckham Rock 2005. Banksy is an anonymous England-based graffiti artist, political activist and film director.

His satirical street art and subversive epigrams combine dark humour with graffiti executed in a distinctive stenciling technique. His works of political and social commentary have been featured on streets, walls, and bridges of cities throughout the world. Banksy's work grew out of the Bristol underground scene, which involved collaborations between artists and musicians.

Banksy says that he was inspired by 3D, a graffiti artist who later became a founding member of the English musical group Massive Attack. Banksy displays his art on publicly visible surfaces such as walls and self-built physical prop pieces. Banksy created a documentary film, Exit Through the Gift Shop, billed as "the world's first street art disaster movie", which made its debut at the 2010 Sundance Film Festival. The film was released in the UK on 5 March 2010. In January 2011, he was nominated for the Academy Award for Best Documentary for the film.

In 2014, he was awarded Person of the Year at the 2014 Webby Awards. Please look at my other items including rare modern and contemporary art and design pieces. The item "BANKSY Peckham Rock (2018) British Museum, Pest Control RARE" is in sale since Monday, March 9, 2020. This item is in the category "Art\Art Prints". The seller is "ashbinx74" and is located in Bruton. This item can be shipped worldwide.
damienmintsignedlithographhandnumberedinvaderfaireyvarianthirstsoldandyframedhotelspacecanvasoriginalwallartistbanksyprintvintageprintsshepardkawspostermondowarholobeyscreenrareeditionwalledlimitedpainting