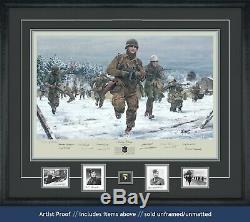 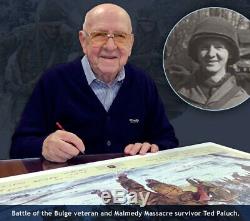 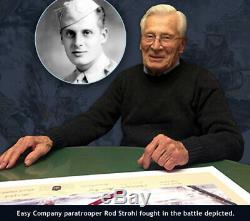 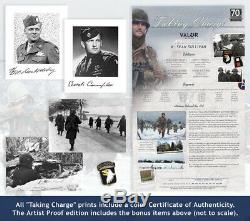 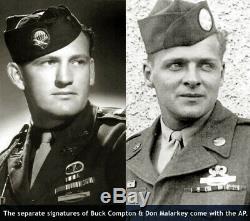 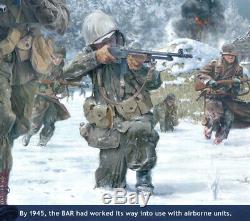 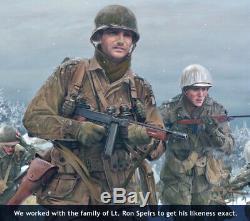 A fine art print by K. January 13, 1945Nearly a month after the Battle of the Bulge began, American forces are back on the offensive. At the Belgian village of Foy, Lt. Ron Speirs leads Easy Company, 506th P. 101st Airborne against an entrenched enemy.

At Foy and in the days to follow, the Allied breakout would prove. Unstoppable, and the Battle of the Bulge would end in victory. This print is from the ARTIST PROOF limited to only 190 numbered prints, signed by artist K.

Malmedy Massacre Survivors Harold Billow & Ted Paluch. Bastogne based Artillery Observer Don Burdick. "Bulge" Infantrymen & first time signers Maurice Berry, Harold Kist, Morris Metz, and Charles Nelsen. Plus 3 other Bulge veterans please inquire for specific names, this print is not hand signed by Ron Speirs, but it was produced with full support of his family. Small historic reproduction photos of the 101st Abn during the Battle of the Bulge to frame with your print.

Screen colors may vary from print colors. Autographed art and collectibles from Valor Studios are created with the full cooperation of the veteran signers who are compensated fairly for signing each item.

DO YOU CARRY OTHER ARTISTS? We have published prints with John D. Shaw, Gil Cohen, William S. For other, stunning military artwork, just ask! The item "Band of Brothers Print depicting Ron Speirs & autographed by 14 Bastogne vets" is in sale since Friday, March 27, 2020.

This item is in the category "Art\Art Prints". The seller is "valorstudiosinc" and is located in Brighton, Colorado. This item can be shipped worldwide.