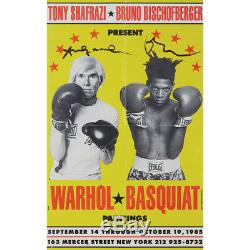 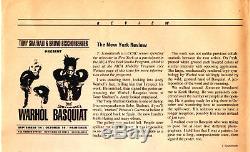 Poster for Warhol/Basquiat Paintings - SIGNED BY BOTH Exhibition poster signed by both artists, from the exhibition at Tony Shafrazi Gallery, September/October 1985. Color printed poster depicting Warhol and Basquiat wearing boxing gloves after the photo by Michael Halsband, signed in black by each artist above their portrait. 19 x 12 inches (49 x 31 cm). Folds, a few ink smudges likely from original signing. Nicely and archivally framed in red and yellow. A very rare dually-signed example of the original exhibition poster from this important gallery show featuring the now-iconic image of Warhol and Basquiat posing as boxers, designed as though advertising a bout. These works were the culmination of their friendship, one which began awkwardly in the late 70's with the younger artist breathlessly hawking his postcard paintings to his idol.

By 1983 through the intercession of Page Powell (Basquiat's lover and Warhol's friend) and Bruno Bischofberger (Warhol's Swiss dealer) the two artists developed a friendship. During this time, Basquiat makes frequent appearances in Warhol's diaries: traveling, exercising, and attending parties together.

Eventually, the two began work on the paintings that would constitute the bulk of this exhibition. It was Bischofberger who arranged for the works to be shown at the Tony Shafrazi Gallery in New York. Shafrazi had once been a graffiti artist himself, achieving his moment of notoriety in 1974 as the man who sprayed the foot-high words Kill Lies All on Picasso's Guernica. But the process was not without conflict. Warhol, whose work ethic was legendary, grew frustrated with Basquiat's erratic appearances and the two worked very little on these paintings at the same time.

The show was a financial and critical failure and marked the end of their friendship. The poster however, remains one of the most poignant and enduring images of the 1980's NY art scene, stylising the artistic partnership into a prize fight, with Warhol and Basquiat standing shoulder to shoulder, wearing boxing gloves and Everlast shorts. The opening of the exhibition was attended by the poster's consignor and her recollections of the event, including descriptions of the moment both Warhol and Basquiat signed the piece, were documented in the October 1985 issue of the California College of Arts and Crafts newsletter. In the article, the opening is described as packed and that it was impossible to see the art work, which served more as a backdrop to the theatre of the moment... The large, mechanically rendered logo-symbology by Warhol was willingly insulted by the wild, gestural hand of Basquiat. ALL AUTOGRAPHS GUARANTEED AUTHENTIC WITHOUT LIMIT. Schubertiade Music & Arts are also members in good standing of ABAA/ILAB , the most exclusive consortium of Rare Book and Manuscript Dealers in the world, as well as the MLA (Music Librarian Association), and MARIAB (Massachusetts and Rhode Island Antiquarian Booksellers). SCHUBERTIADE MUSIC & ARTS deals in Music, Entertainment, Literary and other Autographs, Antiquarian Music, Books, Prints, Photographs & Paintings and Ephemera. Please read more about us in our "about me" page by clicking next to our username / feedback listing. And is so stated on the signed and detailed receipt which comes with every item. The item "Andy WARHOL (Artist) & Jean-Michel BASQUIAT (Artist) SIGNED Exhibition Poster" is in sale since Saturday, November 10, 2018. This item is in the category "Art\Art Prints". The seller is "violinist01" and is located in Newtonville, Massachusetts.