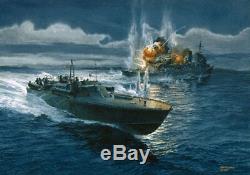 WE SUPPORT OUR TROOPS AND COUNTRY. Tom Freeman passed away, unexpectedly, on June 16, 2015. A brilliant artist, he will be missed by so many around the world.

Tom Freeman was born in Pontiac, Michigan in 1952. He was the third child of James and Doshia Freeman, (3rd of 5 children). The Freeman's lived in Michigan until Tom was 12 years old when the family moved to Baltimore, Maryland. Tom never had any formal art training and had always considered his talent as a God given gift. In fact school was of very little interest to him.

Finally, Proceedings used one of Tom's paintings for their cover. This started Tom on the path of success. Tom started taking 35mm slides of his work and sending them to various book publishers. The first publisher to contact him and offer him a cover was G.

Tom has worked with most of the large publishing houses such as Dell, Jove, Bantam, and Berkley. Tom's work has appeared on many magazines such as Readers Digest, Popular Mechanics, Boating, Yachting, Business Week, and even the TV Guide. His work has been placed on porcelain plaques and plates for Franklin Mint and the Hamilton Group.

On September 3, 2003 Tom presented a painting to President George W. Bush depicting the President's landing aboard the U. The painting was presented to him in the Oval Office.

Tom won the 2003 Gold and Platinum Ozzie Award in the category of "Best use of illustration for a single article, " Popular Mechanics Magazine, The Hearst Corporation. Tom also won the SILA award for the 42nd Society of Illustrators Los Angeles annual contest; winning the silver award for Editorial Artwork. Tom had been selected as the first artist in residence to the United States Naval Institute.

Tom Freeman Numbered Limited Edition Print "Action in the Slot". The Japanese destroyer Makigumo goes down at the hands of PT-124 in 1943.

When one speaks of romantic images of naval vessels of the World War II era, the PTs are at the top of the list. These boats were made of wood with a crew of gutsy sailors who blazed a path through the Pacific theater like no other. Fighting on disease-infected islands, poor facilities, bad food, and extremely limited on all supplies, the crew and skippers performed an impossible mission. In the beginning of World War II, the PTs were tasked with stopping or stalling the Japanese onslaught until the U. Navy was ready to fight on their own terms. The PT boats assisted in the desperate fight, trying to keep the Philippines from falling into enemy hands. General Douglas MacArthur was forced to evacuate after the fall of the Philippines in 1942.

The long road back began in the Pacific with naval battles at Santa Cruz, Coral Sea and the tide-turning Battle of Midway. Eleven PT boats went up against the evacuation of Japanese from Guadalcanal. The Japanese had 16 or more destroyers and heavy cruisers in the slot. On the night of February 1, 1943, PT-123 and PT-124 closed on a target together.

PT-123 was hit and put out of commission. PT-124 pressed on, launching a torpedo at 1,000 yards. The Japanese destroyer MAKIGUMO erupted.

She later sank after hitting a mine off the island of Savo the following night. All Limited Edition prints are numbered (S/N) by the artist and include a Certificate of Authenticity.