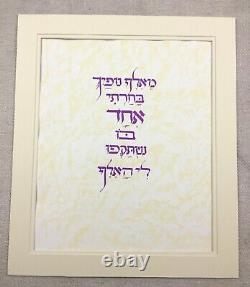 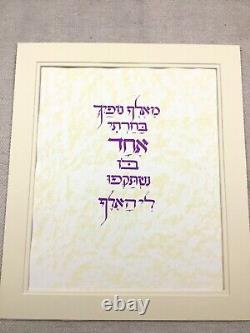 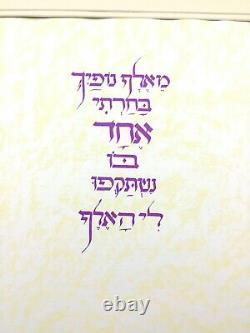 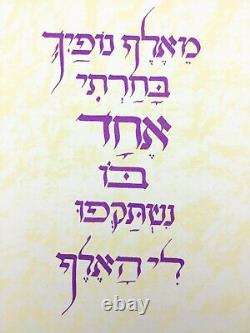 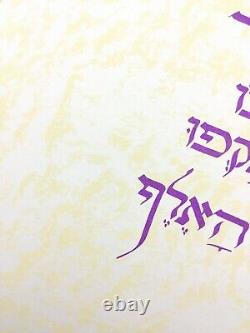 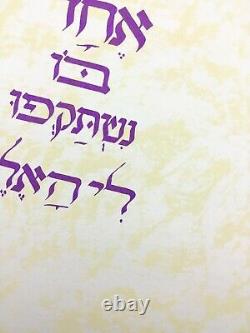 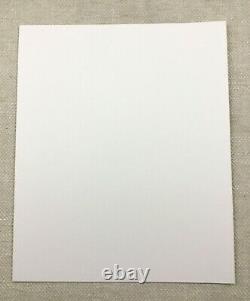 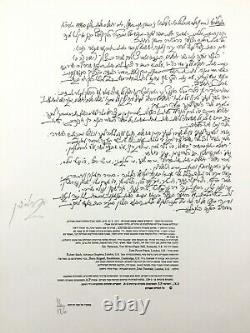 Rare Original Silk Screen Print from Jerusalem - Names in. Praise by Ya'akov Bossidan Circa 1998. Handmade books were produced, and this piece is from book number 18 of 126.

A PHOTOCOPY of the hand signed and numbered publication will be included for your reference see last picture of the original. Condition, Freshly mounted backed and sealed, ready for you to frame. This is a hand made silk screen piece, so there may be minor imperfections - please see the pictures, you will.

Exceptionally rare, a copy of. Jerusalem - Names in Praise' by Ya'akov Boussidan.

A livre d'artiste in homage to Jerusalem and an artistic and intellectual combination of calligraphy, painting and research. Jerusalem dwells in many dimensions and is a source of inspiration to many. It has inspired the finest poets, beginning with King David, and has given visionaries the explanation they have sought for their very own existence.

Starting with the seventy known names of Jerusalem from traditional sources, Boussidan has revealed no less than 391 names given to the city by Jews, including contemporary poets and other enthusiasts and believers who have found their roots in Jerusalem. Boussidan worked on the book for eight years. The silk-prints alone took one year and a half. To ensure quality printing, the paper was hand-made especially for the book according to the artist's directions. Each sheet bears a watermark of the book's emblem - a representation of the City of David, City of the Dove, Navel of the World.

1939 in Port Said, Egypt. Studied at Goldsmiths College (1970). Designed sets and costumes for the Ballet "Phases" (1972). Ya'akov Boussidan was born in Port Said, Egypt, a melting-pot of cultures and languages. When he was ten, he immigrated with his parents to Israel and was educated in Youth Aliyah, an immigrant youth framework at Kibbutz Givat-Chayim.

His artistic talent was discovered by Prof. Reuven Feuerstein, the former chief psychologist of Youth Aliyah and winner of the Israel Prize for Education. Their close friendship continues to this day.

Boussidan's artistic training in Israel began under the guidance of Prof. Joseph Schwartzmann of the Germanic school and a distinguished student of Kathe Kolwitz. Boussidan studied sculpture and ceramics with Rudi Lehmann and Hedwig Grossman and received important exposure to the modern and abstract streams from Shlomo Vitkin. With the encouragement of Prof. Willem Sandberg (former head of the Stedelijk Museum in Amsterdam, and one of the founders of the Israel Museum), the twenty-seven-year-old Boussidan won the Rothschild Foundation Scholarship. This enabled him to continue his academic studies at Goldsmith College in London, where he graduated with distinction for his abstract version of Song of Songs. This print also won an award at the Biennale for Prints in Monte Carlo.

In London, Boussidan became acquainted with luminaries in the art world, including Alix De-Rothschild, Yoko Ono, artists Peter De Francia, Paul Drury and Sam Maitin, sculptor Claes Oldenberg, as well as with writer Alan Sillitoe and his wife, the poet Ruth Fainlight, a close friend of Sylvia Plath. His longstanding friendship with artists such as Agathe Sorel, a fine sculptor and a dedicated printmaker, has a clear impact on his approach to modern printmaking. In addition, the Israeli Cultural Attaché in London at the time, Benjamin Tammuz, became a close friend and used Boussidan as the inspiration for the book Bottle Parables. The noted collector Georges Bloch acted as one of Boussidan's patrons.

In addition, Boussidan's achievements have been credited by the manuscript researcher, Dr. Leila Avrin, who has written about his work in several sources, including the Encyclopaedia Judaica. Bat Sheva Ida Goldman, Curator at the Tel Aviv Museum, is currently writing a consequential essay on Boussidans' Haggadah, and has also interviewed Prof Reuven Feuerstein with his interpretation on this opus magnum. Boussidan has been awarded the Jesselson Prize of Judaica from the Israel Museum in 1990. His celebrated artist book "Jerusalem - Names in Praise", has been launched at the Israel Musuem in 2006 and at the British Parliament in London in 2007, hosted by MP Louise Ellman.

Ya'akov Boussidan has been a visiting lecturer at several colleges in England. In his studio, Boussidan teaches art as a métier, in order to develop his students' potential skills, based on the school of Prof. Handmade 250g by Jim Patterson, at the Two Rivers Paper Mill, Somerset, England. Two Rivers was formed in 1976 and has been run and located at Pitt Mill, Somerset, UK since 1988. It's one of a handful of commercial hand-mills still operating in Europe.

The mill is over 400 years old and still retains much of the ancient wooden milling machinery. It's been restored over the last 15 years to a working water-powered traditional paper mill, using a 100 year old metal wheel from Wales and an 1841 Hollander Rag-Breaker. The wheel itself is a 10ft overshot wheel weighing two and a half tons and standing eleven foot high.

In combination with the rag breaker, Two Rivers will be the only place in the UK where water power is used to make paper from old rags. Showing a continuing commitment to manufacturing using environmentally appropriate methods, a full array of solar panels were fitted to the mill roof in 2011. Electrical heating is used to gently dry our paper in the mill loft. This item is in the category "Art\Art Prints".

london" and is located in this country: GB. This item can be shipped worldwide.