TRACEY EMIN Every Part of Me (1999) FRAMED SIGNED RARE 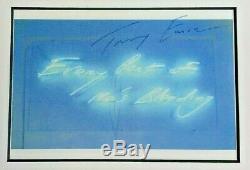 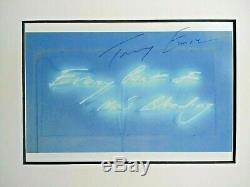 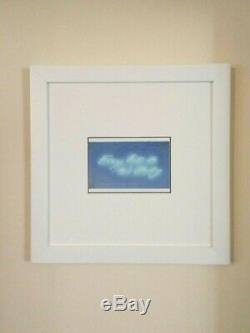 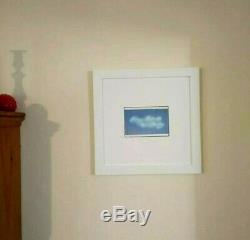 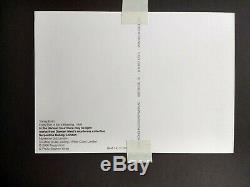 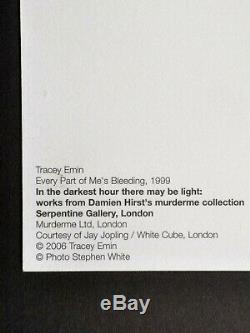 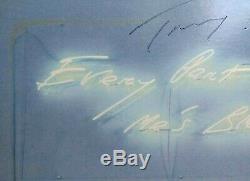 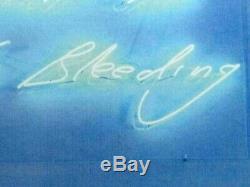 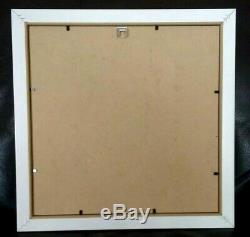 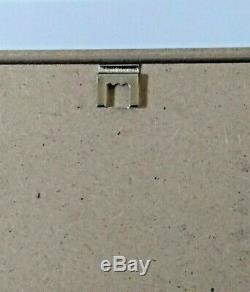 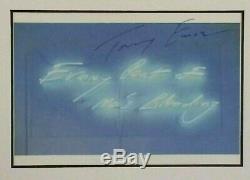 Lehmann Maupin was pleased to announce their exhibition by artist Tracey Emin. Tracey Emin lives and works in London and has been exhibiting widely in Europe and Japan since 1993. A large museum exhibition of her work opened in 1997 at the South London Gallery in London and travelled to the Gesellschaft für Aktuelle Kunst in Bremen, Germany. This was Emin's first one-person exhibition in the United States.

Tracey Emin was born in London in 1963 and was raised in the seaside town of Margate on the English coast. After leaving school at an early age, Emin enrolled at Maidstone College of Art in Kent at the age of 20 and studied painting. She then went to London where she completed a Masters in Painting at the Royal College of Art. Emin is a storyteller whose subject matter comes from Emin's own rich life.

Emin's first one-person gallery exhibition at the White Cube titled "My Major Retrospective" included family memorabilia accompanied with each related story and also presented an archive of Emin's early paintings which she had destroyed. Her book "Exploration of the Soul" told the story of her life from her and her twin brother's conception, their birth and early life to the age of 13. She presented this collection in a series of readings during a journey across America. In 1995, Emin opened The Tracey Emin Museum in London. "Every Part of Me's Bleeding" consisted of many works done in a variety of media including several large-scale sculptures, drawings, neon pieces, video and a quilt.

One large-scale piece in the exhibition is a seaside beach hut from a past vacation spot of Emin's friend artist Sarah Lucas, Emin and a former boyfriend. The actual hut had been carefully taken apart and reassembled in the main gallery space. Through the poetry of her honest retelling of unique and intimate life-events Emin establishes a generous dialogue between the viewer and the artist.

The personal expands to the universal in the way Emin takes a feeling about her life and forms it into a genuine expression of a human emotion. If Tracey Emin could sing, she might be Judy Garland, a bundle of irresistible, pathetic, ferocious, self-indulgent, brilliant energy. Since she can't, or doesn't, she writes, incorporating autobiographical texts and statements into drawings, monoprints, watercolors, collages, quilts, neon sculptures, installations and videotapes.

In her art she tells all, all the truths, both awful and wonderful, but mostly awful, about her life. Physical and psychic pain in the form of rejection, incest, rape, abortion and sex with strangers figure in this tale, as do love, passion and joy.

Emin is among the more open and contentious of the group known as the Young British Artists. Her best known artwork is a small domelike tent appliqued with the names of everyone she has ever slept with, beginning with her twin brother. She is also one of four candidates for this year's Turner Prize, given annually for outstanding work by a British artist. When the Turner short list was made public last week, the announcement cited her current solo show, her first in New York. This accomplishment is hard to assess, although its impact is undeniable.

Stylistically, it ricochets between various Post-Minimalist conventions, early feminist art and installation art. In a neon sculpture reminiscent of something by Bruce Nauman and titled''Very Happy Girl,'' Ms. Emin announces the dimensions of her current boyfriend's penis. She adds a small footnote to the history of installation art by transporting to the gallery a small, wonderfully decrepit beach cottage from the Cornwall coast, where she spent time with an earlier lover. Another installation piece presents a filthy bed, strewn with debris, over which hangs a noose. The most visually convincing artwork, and the one that seems to have involved the most time and work, is an appliqued blanket of bright felt titled''Psycho Slut. The best thing here is simply Ms.

Emin herself, as conveyed by the blurry, improvised videotapes that document her life. Accompanied by the artist's quiet voice-overs, these tapes show the beach hut in its original site, travel the route to and from the London hospital where she had a botched abortion or tell of her traumatic yet triumphant departure from the seaside resort of Margate, where she grew up.

' recounts her life from the moment of conception, while the camera roves about her London flat, presenting it as a series of random messy still lifes. Emin interviews herself, playing devil's advocate and questioning her self-centeredness and excesses. Emin's nihilism is so intensely passionate that it amounts to her life force. It is carried, as this entire exhibition is, primarily by language, by aphoristic assertions and monologues that are part Jean Rhys, part Jean Genet.

In this day of multiple media and blurred boundaries between disciplines, it still seems that she might be less an artist than a writer, whose autobiography and hard-won philosophy of life would work best in book form. But in whatever form Ms. Emin chooses to work, one thing seems clear: she's all voice.

Tracey Emin CBE RA was born in London in 1963 and raised in Margate before studying at Maidstone College of Art and The Royal College of Art, London. Renowned for her installation in the Sensation exhibition at The Royal Academy in 1997, she has exhibited extensively internationally. Her work combines the personal, intimate and honest with the bold and scandalous, and encompasses needlework, sculpture, photography, drawing, painting video and installation. In 2007, Emin represented Britain at the 52nd Venice Biennale, was elected a Royal Academician and awarded an Honorary Doctorate from the Royal College of Art, London, a Doctor of Letters from the University of Kent and a Doctor of Philosophy from London Metropolitan University. Emin was Eranda Professor of Drawing at the Royal Academy Schools from 2011 to 2013. She lives and works in London. Please look at my other items including rare modern and contemporary art and design pieces. The item "TRACEY EMIN Every Part of Me (1999) FRAMED SIGNED RARE" is in sale since Friday, May 24, 2019. This item is in the category "Art\Art Prints". The seller is "ashbinx74" and is located in Bruton.