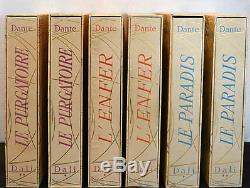 Every piece has been individually inspected, certified, stamped and dated on the verso by Bruce Hochman. The suite as well is signed by Albert Fields on the back of the Justification page. DESCRIPTION The Divine Comedy suite consists of 100 color wood engravings created between 1960 and 1964 after 100 watercolors painted by Salvador Dali between 1951 and 1960. More than 3,000 blocks were necessary to complete the engraving process. In the early 1950s Salvador Dali was invited by the Italian government to commemorate the birth of Dante, Italys most famous poet, by producing a series of illustrations for a full-text, deluxe edition of Dantes masterpiece, the Divine Comedy.

Ultimately, the illustrations were not well received by the Italians, as it was deemed inappropriate for a Spanish painter (rather than an Italian painter) to have illustrated the work of Italys greatest poet. Even though the project was dropped in Italy, Dali and French publisher Joseph Foret continued to pursue publication of the Divine Comedy. Foret acted as broker between Salvador Dali and Les Heures Claires, a French editing and publishing house that ultimately took full charge of the project. Working in conjunction with Salvador Dali, Raymond Jacquet, with his assistant Jean Taricco, created the blocks necessary for the engraving process. While frequently referred to as wood blocks, they were actually a resin-based matrix.

Salvador Dali directly supervised the production of the works and gave final approval for each of the finished engravings. Once the project was complete, all of the Divine Comedy blocks were destroyed. The engraving process required the block be cut, a single color applied, then printed to the substrate e.

The block was then cleaned and cut away for the next color. As the engravings were made, the image was progressively printed, and the block was progressively destroyed. The process required great skill and resulted in works of spectacular beauty which cannot be reproduced in a manner that is not detectable as a reproduction, even to the casual observer.

The French version of the Divine Comedy illustrated by Salvador Dali was published by Joseph Foret and by Jean Estrade of Les Heures Claires. Foret published only 33 deluxe books which are very special.

This item is in the category "Art\Art Prints". The seller is "cjrent" and is located in West Palm Beach, Florida. This item can be shipped to United States, all countries in Europe, all countries in continental Asia, Canada, Mexico, Australia.