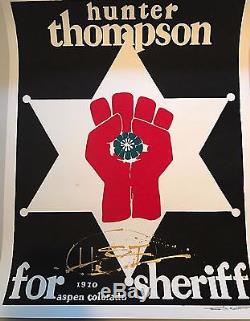 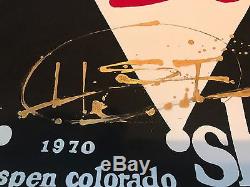 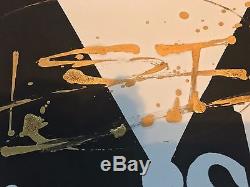 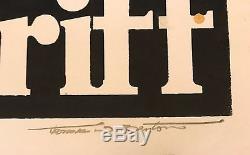 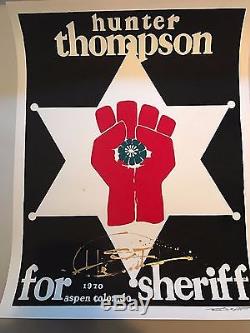 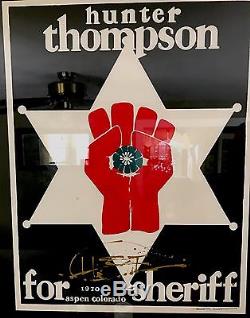 Thompson For Sheriff silk-screened poster, autographed in thick gold paint pen by Hunter S. Thompson, and in pencil in the white margin by the artist Thomas Benton. Signed at official private autograph sessions. I had it framed with conservation glass and have had it inside away from the sun ever since.

Jean Carroll biography of Hunter. They were only handed out to guests at the book launch party at Elaine's in NYC, so unless you were there with Geraldo and Penn Jillette and I back in 1993, you did not get one.

The person who owns the gallery said it was an authentic Benton, but he could not say one way or the other if it was Hunter's signature, because I guess at some point in the 80's Tom and Marci may have forged a few of these when they were hard up. So he was non-committal, which cost me the sale. I bought this from Tom and Marci in 1997 when they were on good terms with Hunter, so I have no reason to suspect they forged it. Marci was trying to convince me to come stay with them for a few weeks and hang out with them and with Hunter. (I could not go, a regret I carry to this day). If they DID forge it, it is a world famous artist forging a world-famous journalist's signature on one of his own signed lithographs, which is pretty rare and pretty amazing. The gallery owner based his decision off of a photo, not an actual inspection of the item, so take the analysis for what it is worth. I've tried to show the signature in very great detail so do your own legwork if somehow you think this is not the real deal.

The other guy got cold feet, I took it back. That is how I do things. So I will be marking this back up to gallery level. Did Hunter sign it, or did Tom sign Hunter's name?

Either way, it is a very rare piece of Hunter S. Thompson / Tom Benton art. If you are interested, do your homework first, then talk to me, and we can possibly make a deal. His friendship and collaboration with gonzo journalist Hunter S. Thompsonned more than four decades and created or inspired some of Bentons most recognized works, including a series of political posters that combined Benton's art and Thompson's writing the Aspen Wall Posters. Benton went on to create campaign posters for more than fifty candidates including George McGovern, Gary Hart and Pitkin County Sheriff Bob Braudis. He also created numerous cause posters for local benefits, non-profits and charitable causes that suited his beliefs. Bentons art continued to evolve throughout his lifetime from political posters to abstract silkscreen prints, monotypes and oil paintings. Benton was diagnosed with advanced lymphoma in early 2007, and died April 27, 2007. A recently released book about Benton's life and work, Thomas W. Won the 2012 Colorado Book Award.

The item "RARE Signed Hunter S. Thompson for Sheriff Thomas W. Benton Silkscreen Gonzo" is in sale since Sunday, April 02, 2017. This item is in the category "Art\Art Prints". The seller is "halmcc007" and is located in Homer, New York.

This item can be shipped worldwide.
mintmondoinvaderlimitedspacesoldpicassoprintswallposterdamienframedpaintingartisthandkawsprinthotelhirstlithographandyvintagefaireynumberedshepardscreenrarewarholobeybanksycanvasoriginalsignededitionwalled