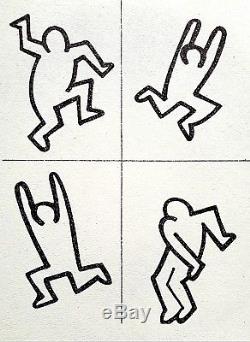 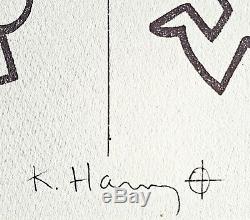 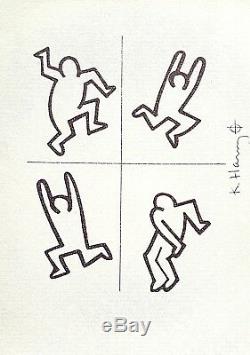 Keith Haring, Figures 1986, Hand Signed Lithograph. It sells as a copy. No certificate of authenticity (COA).

You will receive the item from the photos. I accept return within 14 days. The lithograph will be without a frame. Is a printing process that uses a flat stone or metal plate on which the image areas are worked using a greasy substance so that the ink will adhere to them by, while the non-image areas are made ink-repellent. A printing process based on the fact that grease and water do not mix.

The image is applied to a grained surface (traditionally stone but now usually aluminium) using a greasy medium: such as a special greasy ink called tusche, crayon, pencils, lacquer, or synthetic materials. Photochemical or transfer processes can also be used.

A solution of gum arabic and nitric acid is then applied over the surface, producing water-receptive non-printing areas and grease-receptive image areas. The printing surface is kept wet so that a roller charged with oil-based ink can be rolled over the surface, and ink will only stick to the grease-receptive image area. Paper is then placed against the surface, and the plate is run through a press. Lithography was invented in the late eighteenth century, initially using Bavarian limestone as the printing surface.

Its invention made it possible to print a much wider range of marks and areas of tone than possible with earlier printmaking relief intaglio methods. It also made colour printing easier: areas of different colours can be applied to separate stones and overprinted onto the same sheet. Offset lithography involves printing the image onto an intermediate surface before the final sheet. The process is offset because the plate does not come in direct contact with the paper, which preserves the quality of the plate.

With offset lithography, the image is reversed twice and appears on the final sheet the same way round as on the stone or plate. ETCHING is a printmaking technique that uses chemical action to produce incised lines in a metal printing plate which then hold the applied ink and form the image. The plate, traditionally copper but now usually zinc, is prepared with an acid-resistant ground. Lines are drawn through the ground, exposing the metal. The plate is then immersed in acid, and the exposed metal is bitten, producing incised lines. Stronger acid and longer exposure produce more deeply bitten lines. The resist is removed, and ink applied to the sunken lines but wiped from the surface. The plate is then placed against the paper and passed through a printing press with great pressure to transfer the ink from the recessed lines. Sometimes ink may be left on the plate surface to provide a background tone. Etching was used for decorating metal from the fourteenth century but was probably not used for printmaking much before the early sixteenth century.

Since then many etching techniques have been developed, which are often used in conjunction with each other: soft-ground etching uses a non-drying resist or ground, to produce softer lines; spit bite involves painting or splashing acid onto the plate; open bite in which areas of the plate are exposed to acid with no resistance; photo-etching (also called photogravure or heliogravure) is produced by coating the printing plate with a light-sensitive acid-resist ground and then exposing this to light to reproduce a photographic image. Foul biting results from accidental or unintentional erosion of the acid resist. Like engraving, etching is an intaglio technique. Intaglio refers to all printing and printmaking techniques that involve making indents or incisions into a plate or print surface which hold the ink when ink is applied to the surface and then wiped clean.

Keith Haring was an American artist and social activist known for his illustrative depictions of figures and symbols. His white chalk drawings could often be found on the blank poster marquees in New Yorks public spaces and subways. I don't think art is propaganda, he once stated. It should be something that liberates the soul, provokes the imagination and encourages people to go further. It celebrates humanity instead of manipulating it.

Born on May 4, 1958, in Reading, PA, he grew up in neighbouring Kutztown, where he was inspired to draw from an early age by Walt Disney cartoons and his father who was an amateur cartoonist. After briefly studying commercial art in Pittsburgh, Haring came across a show of the works of Pierre Alechinksy and decided to pursue a career in fine art instead.

He moved to New York in the late 1970s to attend the School of Visual Arts, and soon immersed himself in the citys graffiti culture. By the mid-1980s, he had befriended fellow artists Andy Warhol, Kenny Scharf, and Jean-Michel Basquiat, and collaborated with celebrities like the singer Grace Jones. Diagnosed with HIV/AIDS in 1988, Harings prodigious career was brief, and he died of AIDS-related complications on February 16, 1990, at the age of 31. Before his death, Haring established the Keith Haring Foundation, a non-profit committed to raising awareness of the illness through art programming and community outreach.

The artists mural Crack is Wack(1986), can still be seen today on a retaining wall along FDR Drive in Manhattan. Harings works can be found in the collections of The Museum of Modern Art in New York, the Los Angeles County Museum of Art, the Art Institute of Chicago, and the Smithsonian American Art Museum in Washington, D. The item "Keith Haring, Figures 1986, Hand Signed Lithograph" is in sale since Monday, November 12, 2018.

This item is in the category "Art\Art Prints". The seller is "floreacip" and is located in London. This item can be shipped worldwide.