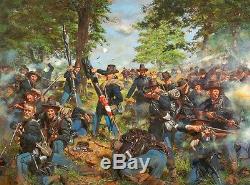 WE SUPPORT OUR TROOPS AND COUNTRY. THE ARTIST - Don Troiani DON TROIANI is a soul lost in time; a twentieth century artist to whom the life of the common soldier of the Civil War through the mid Eighteenth Century is as familiar and vivid as the surroundings of his Connecticut studio. While there are many other painters who have turned their attention to historical art, none have done so with the enthusiasm, insight and dedication of this accomplished recorder of drama and detail. In the spirit of presenting historical truth through art, Don Troiani has personally set uncompromising standards of excellence and authenticity in his field that few others can equal.

Models are chosen with the greatest care to achieve the proper look of the men in Colonial and Victorian America. The garb and gear of each figure are painstakingly researched. Appropriate backgrounds are found and studied, sometimes sending the artist hundreds of miles from home to examine battlefields and structures firsthand. Because of the great amount of research that goes into one of his works, it is often years between a painting's conception and the actual moment the brush is put to canvas.

"If an historical painting is not reasonably accurate, then it's worthless both as art and as a historical document, " Troiani declares. If you are going to become involved in this field then there is little excuse for a pattern of inaccuracies.

Indeed, Troiani's lifelong focus on America's military heritage enables him to present that subject with a credibility that surpasses his contemporaries. For a quarter century he has methodically built one of the great private artifact collections of Civil War, 1812 and Revolutionary War, World War II uniforms, equipage, insignia and weapons which he calls on to add the unique dimension of realism he is so well known for. An expert researcher with a personal Military library of over 2,500 volumes, he is assisted in his search for the truth by a select network of advanced collectors, curators and historians whom he corresponds with regularly and who open their own collections to him. Hollywood has enlisted him as consultant on "Civil War Uniforms and Equipage" for the acclaimed feature film "Cold Mountain" starring Nicole Kidman, Rene Zellweger and Jude Law for which he received screen credit. Also in Cold Mountain, The Journey from book to film. " Troiani has also been military advisor(and made appearances) on the A&E and History Channel's "Civil Journal" and the miniseries "The American Revolution. Televison appearances on "Missing Reward", "Incurable Collector", and "Hunt for Amazing Treasures" are among his credits. "Black Hats, 19th Indiana Regiment - Iron Brigade at Gettysburg" Don Troiani S/N Limited Edition Print.

The Nineteenth Indiana marched to. In 1863 as a veteran regiment in the famous Iron Brigade.

Along with the Second, Sixth and Seventh Wisconsin, and later the Twenty-fourth Michigan, the Hoosiers saw action at Gainesville, Second Bull Run, South Mountain, Antietam, Fredericksburg and Chancellorsville. None of the fighting, the veterans said later, prepared them for what they called the "four long hours" of. Gettysburg, where the Iron Brigade was all but wrecked. The brigade ran into the infantry fighting at mid-morning on a hot day and enjoyed early success in the open fields northwest of. Gettysburg, knocking back two Confederate Brigades.

It those damned Black Hats! The Confederate called on seeing the Western men and their famous headgear. By afternoon, however, the Confederates were advancing in heavy lines to seize the town. The Iron Brigade was strung out in defensive position above Willoughby Run on McPhersons Ridge.

The Nineteenth Indiana was on the left with the Twenty-fourth Michigan, Seventh Wisconsin and Second Wisconsin extending the line to the north. The Sixth Wisconsin was detached and posted elsewhere.

The Union line was outnumbered and overlapped. By mid-afternoon, the outnumbered Hoosiers were fighting for their lives, bending back under a heavy flank fire, and disappearing like dew before the morning sun. The Nineteenth Indiana carried two flagsa blue regimental presented by the ladies of. And a national color requisitioned when a complementary national flag from 1861 was retired.

Burlington Cunningham, already once wounded, was carrying the national banner when hit a second time. Nearby, Color Corporal Abe Buckles also went down. Lieutenant Colonel William Dudley grabbed the national flag and was shot in the right shina wound that would cost him his leg. In the noise and smoke, Sgt.

Asa Blanchard came up to take the flag, saying: Colonel, you shouldnt have done this. I shall never forgive myself for letting you touch that flag. Color bearers were now down and half the regiment killed or wounded. Under heavy fire from two advancing Confederate brigades, the. Flagnow in the hands of another manfell yet again.

Before Blanchard could reach it, however, Color Corporal David Phipps, who was carrying the. Regimental, scooped up the fallen national and was waving it with one hand. Then Phipps was wounded and fell on both flags.

Someone shouted and Captain William W. Macy yelled to a nearby private to Go and get it! Go to hell, I wont do it, said the soldier.

Macy, Lieutenant Crockett East, and Color Corporal Burr Clifford rolled the Phipps off the flags. Aware the bright silk was attracting bullets, East furled the banner and got it into its case and was trying to wrap the tassels when he was shot and killed. Macy and Clifford finally got the two flags in the cases only to be confronted by an angry Blanchard, who demanded the flags.

No, theres been enough men shot down with it, said Macy, but Blanchard appealed to Colonel Samuel J. Williams and the colonel told Macy to turn over the flags. In a swirl of bullets, Blanchard stubbornly unfurled the national colors and tied the case around his waist, calling in a loud voice Rally boys! He was waving it when a bullet severed an artery in his thigh and he fell in a gush of blood, dying almost immediately. Clifford then picked up the national color and made a run for the town and safety.

The Iron Brigade line was soon swept away and the surviving Black Hats made their way through. To the Federal rally point on Cemetery Hill. Their stout fighting delayed the Confederates long enough to allow Union forces to secure the defensive positions that would win the battle over the next two days.

But the holding action came at terrible cost. The Iron Brigade marched to. With 1,883 men and by dusk only 671 rallied around the flags. In the Nineteenth Indiana, of the 288 carried into the fight, only 78 were still in ranksa loss of almost 73 percent. Herdegen -Chair, Wisconsin Civil War Sesquicentennial Commission.

If the Limited Edition is 400 s/n, there would be 40 APs. This status is noted on the print.

Collectors prefer APs because their value increases even more than a Limited Edition as time goes by. A remarque is a pencil drawing done in the white border area of an art print. The subject of the remarque is usually determined by the artist. Each remarque is a piece of original art which adds to the value of the print by making that particular print unique and exclusive from the rest of the prints in the edition.